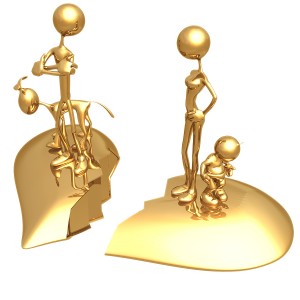 Unless you were married at 15 years old, you probably had a credit file before you married your spouse.  You did your thing, gaining credit cards, bank accounts, signature loans, student loans…just like anybody else.  But after marriage, things can change.

When you obtain credit while married, you AND your spouse engaged in a contract agreeing to pay your bills.  A divorce decree does not change that contract.  And therein lies the problem.

It is important when you consider divorce to weigh the ramifications of your joint credit accounts.  You should make some decisions and follow through, including:

Remember, the divorce decree is simply an agreement between you and your spouse, and the court, on how you will pay the debts.  It has nothing to do with each creditor, until you ask the lender to change the status of the account to just being owed by one of you.  You both remain responsible until that happens.  So if your ex-spouse agreed to pay one credit card in the divorce, and then doesn’t, you are still responsible for the debt, and the actions you take will be accurately reflected on your credit report.  You may be required to pay off the debt, and then seek remedy through the courts from your ex-spouse.

The decisions you make on which accounts to keep will eventually affect your overall credit report.  For instance, if you have 4 credit cards as a couple for $2500, $5000, $10,000 and $15,000 each, you both have a total credit limit of $32,500.  Let’s say the wife takes the two smaller accounts.  Then her total available credit limit is dropped to $7,500, and the husband’s changes to $25,000.  If you both worked, then your combined incomes would affect your ability to borrow; so as you become a single person, you are relying on your income alone to qualify you.  If the two accounts you took over have little debt on them, then your debt-to-credit ratio may be improved by the change.  However, the person who takes the accounts with the most debt load will suffer a burden credit-wise until those are paid down.  The decisions about which accounts to keep should be carefully considered depending upon how much has been charged on each account.

If couples do not deal with these issues, then it can be disastrous down the road.  Let’s say a couple has been divorced for 5 years, but did not deal with these issues completely.  One spouse’s circumstances change, and he stops paying the bill.  If the wife was not removed completely from the account prior to the divorce, her credit will be affected by his non-payment.  In some cases, vindictive behavior during the divorce by one or both spouses can have a very direct, very negative impact on both credit reports.

Another good idea in the divorce situation is to freeze spending on all accounts.  In this way, a vindictive partner cannot harm the other by wildly charging up debt.  You can use the new card that you get in your own name to purchase new things that you need, as long as you have determined that you have the income to pay for that new charge plus take care of the old bills for which you have taken responsibility.

Make sure that all bills are paid on time during the divorce.  The last thing you want is for your creditors to change your interest rate upwards because you missed a payment.  That simply makes the problem worse.

Also See:     Buying A Home     Buying or Leasing a New or Used Vehicle     Credit and Bankruptcy     Your Kids and Money